Why Buy a New Cast Iron Clawfoot Bathtub Instead of an Antique Vintage Tub?

You’ve just purchased a Victorian Era styled house or wish to build or remodel based on the style and are looking for a tub fitting the period. In early America, when main bathrooms came in to style, the cast iron clawfoot tub became the standard. Known for their durability and temperature retention the cast iron bathtub became the hallmark soaking tub used through several generations.

Why did they fall out of favor?
in 1883, both the Standard Sanitary Manufacturing Company (now American Standard) and Kohler began the process of enameling cast iron bathtubs to form a smooth interior surface. For a time, only the wealthy could afford the cost of a cast iron bathtub but when they started mass producing the tubs it opened up availability to home owners of lower income levels. Which was great, however, the sheer weight of the tub limited the type of houses the tub could be put in and generally only on the first floor. In many cases, having a properly reinforced floor to accommodate a heavy tub may not have been in a homeowner’s budget or consideration when building or purchasing a home back then. Other materials and lighter weight options eventually began to enter the scene and take over the market. Slowly the beautiful and timeless cast iron bathtub disappeared as an option to purchase “new”.

Why did it take them so long to emerge back in to style?
Actually, the clawfoot tub never really lost its allure to home buyers and remodelers who cherished the look and the period of American history they represent. For many years it was nearly impossible to find a brand new cast iron bathtub and buyers started turning to the secondary market. Availability of new tubs in the U.S.A. was impacted by the amount of lead content in the tubs manufactured at the time as well as the fact that the American National Standard plumbing codes changed. The change in the code essentially prevented vintage cast iron tubs from passing plumbing inspections on new builds and bathroom remodels.

Take a look at the placement of the overflow and faucet holes on a vintage tub. 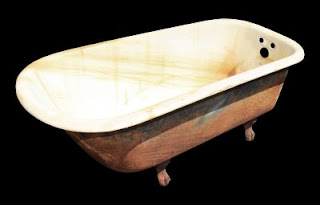 Now take a look at the placement of the overflow and faucet holes on the new cast iron bathtub. 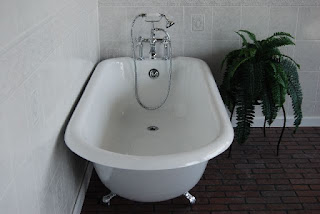 The revised plumbing codes required the placement of the overflow to be at least on-to-two inches below the rim of the tub, where the incoming waterlines come through the faucet. This is a precaution against a drop in pressure in the water line, such as a break. With the faucet being above the rim the bathwater is prevented from being siphoned out, back through the lines, which would contaminate the fresh water supply. https://law.resource.org/pub/us/code/ibr/iapmo.upc.2009.pdf

In an online article, This Old House states, “For an average cost of $350 to $500-a fraction of the $1,200 to $5,000 expense of a new cast-iron or steel tub installed — refinishers can make an antique fixture look brand new.” This may be applicable to a homeowner who has an existing cast iron tub which requires refinishing to bring it back to life as the owner is not remodeling or building a new home. If the tub is not part of the original structure the story and estimates may prove significantly higher, perhaps even more costly than purchasing a new clawfoot tub and fixtures.

Essentially, an antique cast iron clawfoot tub found on secondary seller sites such as Craigslist would have to be retrofitted to accommodate modern plumbing so as to pass inspections. This would require, not only, a thorough refinishing of the inside and outside of the bathtub but also a significant cost in plugging the existing holes on the face of the vintage tub. Both the plugging of the holes and the refinishing or reglazing of the bathtub results in a tub that is now not original porcelain on the surface. Once a the tub has been refinished or reglazed the owner now has to be concerned with cleaning chemicals and sharp or heavy items which may damage or discolor the new surface. Inevitably the tub will have to be professionally resurfaced much more often than a new porcelain cast iron bathtub.

Here at Tub King, in Jacksonville, Florida, we routinely refinish vintage tubs, farmhouse sinks, and other items. We are also the only approved refinishing/resurfacing trainer in the entire United States for Midwest Chemicals. We have a great love for the antique cast iron tubs and thoroughly understand the allure of wanting to have that “feel” and “look” of the past, which is why we sell brand new cast iron clawfoot and pedestal bathtubs for new home builders and home remodelers. In the end, what you “think” is a higher cost saves money and headaches down the road when deciding whether to purchase a new or buy a vintage tub.

When pricing the purchase of a new tub or considering the expense of retrofitting and refinishing a vintage tub, consider the long term savings of buying brand new and visit www.tubking.com or calling us at (800) 409-3375. 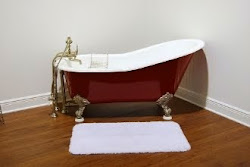 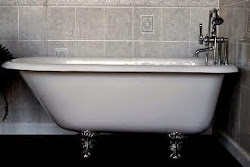 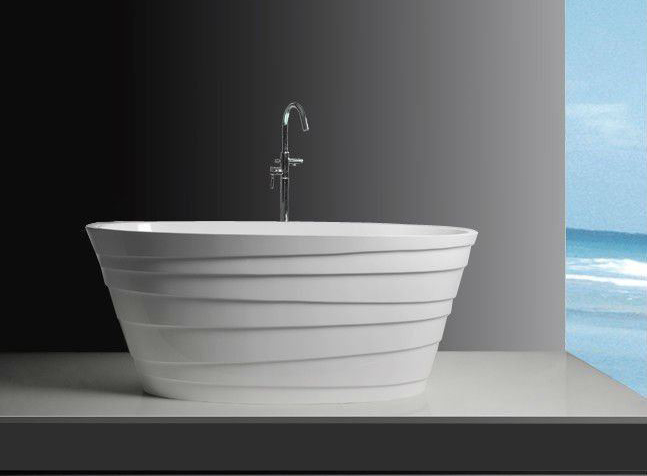